2022 represents the 50th Anniversary of Title IX, making this a great moment to celebrate Chelsea’s softball teams. Bill Wescott started the varsity program in 1977. He was succeeded by Charlie Waller who took the team to the finals in 1982 and again in 1985.

The two foundations will be sharing a tent at the softball event located at the Chelsea Softball Complex on Old US-12. Alumni, supporters, and future supporters will be welcomed with cookies and warm greetings.

This honorary event recognizes milestones in these four teams’ careers and will feature a round-robin tournament starting at 10 am. The event is free and open to all supporters.

There will be four teams playing, Chelsea, Holt, Livonia Churchill, and Farmington, on two fields. Parking is available in the large lot adjacent to the softball fields. The Chelsea High School Concession stand will be open, and lunch will be provided to all alumni and their families.

After the first game, Head Coach Jeff Connelly will recognize the honored teams and alumni in attendance from 1982 & 1985. And between games two and three the 2002, and 2003 teams will be honored at around 2 pm. 2002–2003 Head Coach Kim Reichard will also be present. 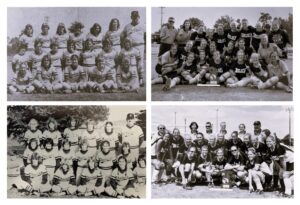 Chelsea has a rich tradition of stellar softball teams, and these four squads were among the best in the program’s successful history. 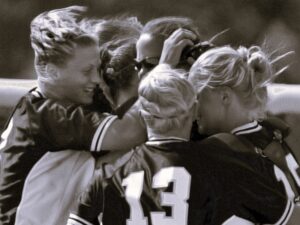 “They were so mentally tough,” Reichard said of the two teams. “They were just a group of great competitors. Every single person had a role, whether you were on the field or off the field.”

Reichard has coached at Holt for the past 15 years, with one season at Haslett sandwiched between six years at Chelsea. 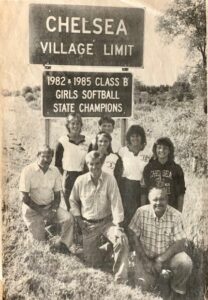 Chelsea won the coveted state crown in 1982, lost in the regional final in 1983, lost in the final game in 1984, and won it all again in 1985. ‘Chelsea Girls are Softball Champions – Girls Defeat Richmond, 7-4, in Final Game of the State Tournament’ Headline news in The Chelsea Standard, June 19, 1985

Head Coach Charlie Waller was asked which of the two state championships excited him the most?  “I really didn’t expect we would win in 1982, but the team’s grit, determination and skill pulled us through. I thought from the start that this year’s (1985) team had a good shot at winning it all, and I’ve pointed toward it.  When you get into tournament games, luck is important because everybody is good and there isn’t much difference between winners and losers, but I will say that winning is very satisfying.”

Both foundations send a big thank you to the Athletic Department, Brad Bush, Athletic Director and Assistant Principal, and Jeff Connelly, Head Coach, for collaborating and supporting this Honorary Event, helping set up the tent, and welcoming everyone to the festivities.

Chelsea Education Foundation is a 501 (c)(3) nonprofit organization that provides funding for a broad spectrum of educational activities benefiting the students of Chelsea. CEF has donated $1.1 million in supporting grants & scholarships throughout the Chelsea School District. Chelsea Education Foundation’s mission is to enhance the Chelsea School District’s educational experiences by financing projects beyond the resources of the district and by providing scholarships to district graduates. For more information, visit www.chelseaeducationfoundation.org.